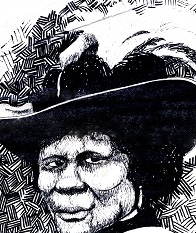 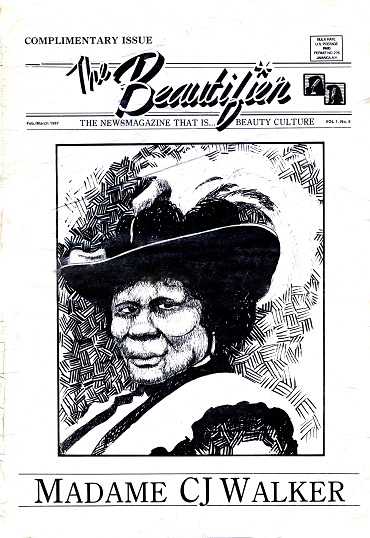 Madam CJ Walker, after experiencing an early life of poverty and hardship, went on to become the first black female millionaire.  This was made possible by her inventing and manufacturing of cosmetic products, particularly hair preparations.  Her innovative accomplishments have made her an ideal role model for black women everywhere.

The difficulties black women had in styling their naturally curly hair was noted by Madame CJ. Walker.  To straighten out kinks, they had to press an iron against batches of their hair placed against a flat surface.  She however, sought an easier method. By investing $2 and using trial and error methods she finally came up with a formula for a preparation which would stiffen strands of hair, making it easier to press and style.  She then went on to assist in the modification of the design of a metal comb that could be heated and used in pressing and styling hair much better than any previous device.  In 1905, Madame CJ. Walker invented the hair conditioner. Trying it out on herself and relatives until she had a commercially acceptable product she then began making it in tubs packing it in jars and peddling it door to door in St. Louis. After deciding to expand she toured for two years, promoting her products.  She built up a large mail order clientele by advertising in black newspapers and magazine and traveling around demonstrating her products.

Madam CJ. Walker is an idea example of a woman who has come a long way.  Born Sarah McWilliams, in 1867, to ex-slave parents in Delta, Louisiana, she was orphaned at 7, married at 14, and left widowed with a small child at 20.  Deciding to begin a new life, she traveled to St. Louis and worked as a laundress in order to send her daughter to school.  In the 1890’s, she married Charles J. Walker and subsequently made famous her new hairstyling formula.  As business expanded she established many Walker Schools of Beauty Culture across the country.  Moreover, she gave employment to some 3000 persons, mostly women, who naturally set the example for potential clients.  Her success was so phenomenal, and ideas so original, that other businesses are said to have subsequently imitated her.  At the peak of Madame CJ. Walkers career, she had 2000 salesmen selling the ever-lengthening line of Walker products, an annual payroll of $200,000 and business amounting to $500,000 annually.  Until the end, she remained modest, generous and genuinely interested in promoting projects beneficial to her people and nation.  Still, she lived in a style befitting her fortune.  She built a $250,000 mansion, Villa Lewaro at exclusive Irvington-on-the-Hudson, New York, which was lavishly furnished.  Her will provided for dividing her estate of nearly two million between her daughter (one-third) and schools and charities (two-thirds)

Although warned by her physicians that her hectic life increased her hypertension, she continued her activities, became ill in St. Louis and died of chronic nephrites at the age of 52 in 1919.  That same year it was said in an editorial that she “revolutionized the personal habits and appearance of millions of human beings.” Until today, she is remembered as having advocated cleanliness and loveliness to advance self-respect and racial pride.  Her spirited ambition and unceasing drive caused her to become a woman years ahead of her time.  Never allowing her sex or her race to limit the extent of her goals brought her the much deserved admiration which she acquired. TB    Written by: Usha Dyle,   Drawing by: Christopher Lynch